There’s no place like The San Francisco School for the holidays!

As we celebrate our 52nd year at The San Francisco School, the holiday season is once again filled with magic - even considering San Francisco’s notorious lack of snow. Tiny preschoolers with tinier jingle bells sing for older classes, upper elementary students and 8th Graders embrace marathon rehearsals for the winter plays, and the promise of ice skating and winter break lingers just around the corner. And, of course - there is singing. At SFS, there is always singing.

The debate over holiday music in schools is as old and well-worn as some of the songs themselves. Perhaps not as old as “O Holy Night”…but definitely at least as old as the Mariah Carey version. School communities wonder: does including religious music in a holiday program alienate those who don’t share its beliefs? Or would its exclusion mean preventing children from learning classic pieces of music?

We at SFS have had these debates too, and we continue to have them, making sure to regularly examine how the songs we choose fit our school’s values, and to seek out what is not yet included, and who is not yet represented. Like so many things in education, it is a process in which to re-engage over and over. 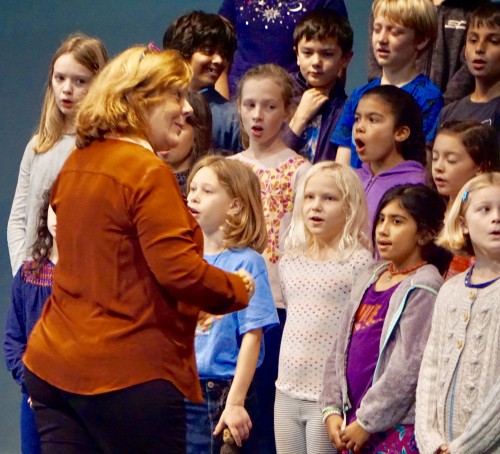 In the end, we have chosen over the past 43+ years to teach students many kinds of holiday music and traditions  - secular, sacred, and across multiple religions and cultures - while simultaneously helping them differentiate between their meanings. Music teacher James Harding noted, “I am proud that at The San Francisco School we don’t have to eliminate the beauty of these songs….what we do now is sing some songs that are ‘winter,’ or pagan (‘Jingle Bells,’ ‘Deck the Halls,’ ‘Walking in a Winter Wonderland,’ ‘Frosty the Snowman’), some that are Jewish (‘Oh Hanukkah,’ ‘Dreydl,’ ‘Shalom Chaverim’), and some that are Christian or mention Christmas (‘Silent Night,’ ‘Hark the Herald Angels Sing,’ ‘We Three Kings,’ ‘Silver Bells’). In Singing Time, we identify the differences between these kinds of songs, and we let the kids know that we are enjoying the messages and beauty of these songs, not singing them as expressions of belief in one faith or another.” He went on to mention other events that take place starting in late fall and early winter, such as 3rd Grade teacher Laura Burges’s annual retelling of Buddha’s Bodhi (Enlightenment) Day, and our parent-led Diwali (Indian Festival of Lights) celebrations.

Doug went on to say, “The question of inclusiveness is a real one and not one to be taken lightly. My hope is— and always has been— to use this as an opportunity to widen the conversation and take a look, as age-appropriate, at the historical context of people’s hunger for the miraculous, their thirst for mystery, their hope for the return of light and all the diverse forms those common yearnings have taken. By educating ourselves about how these traditions overlapped and sometimes borrowed from each other, tasting the power of each through song and stories and accenting the common humanity behind them, I think we’ve found a wonderful alternative to mindlessly celebrating one or banning all.”